Beat the Crowds and Experience Spectacular Winter Scenery: Why Travel Experts Say Australians Should Consider Travelling to the Northern Hemisphere in Winter

As summer quickly approaches in Australia, there are many places perfect for an idyllic winter escape in the northern hemisphere. Inspiring Vacatio...
Education

Mighty Swell's recent honors include rankings on Inc. 5000 and Austin Business Journal's Fast 50, a 2022 "Best CEO Award" and its own City of Austin holiday. Accelerating its growth and awareness is a revamped Board of Directors, effective Nov. 8, 2022.

Between September and October, the company received four awards and honors. Mighty Swell again ranked in the Inc. 5000 for the fastest-growing companies in the United States, with a three-year increase of 217%. In Central Texas, Mighty Swell ranked #14 in the Austin Business Journal's "Fast 50 Awards." Additionally, the Austin Business Journal awarded CEO Jeana Harrington with the "2022 Best CEO Award" for a small company. The company partnered with the City of Austin to create a local holiday commemorating its anniversary: "Mighty Swell Keep it Weird Day" which will be celebrated with events benefitting local organizations yearly on Sept. 16.

"Mighty Swell has reached an inflection point where we have proven our concept. In spite of intense competition and the brunt of economic and supply chain issues, we continue to grow," says CEO Jeana Harrington. "It is time to pivot from emerging brand survival to a period of accelerated growth. Our existing Board of Directors supported us to our current position - we appreciate them immensely. Our new Board of Directors have founded, operated and exited multiple successful CPG, alcohol and beauty brands - all have unique and complementary areas of expertise, and they will help to guide Mighty Swell through this next phase."

Mighty Swell's Board of Directors will be chaired by Sean Cusack, the original creator of Mighty Swell as well as Founder of Waterloo Sparkling Water, who oversaw the brand's 2020 sale to an investor consortium led by Flexis Capital. "As Mighty Swell's Chairman, I am excited to play an integral role and help the company continue to bring true innovation to this category."

Joining the Mighty Swell Board of Directors are: Tiffany Masterson, Founder of iconic beauty brand Drunk Elephant, which sold to Shiseido for $845M in 2019.

Jason Shiver, CEO of Waterloo Sparkling Water, who oversaw the brand's 2020 sale, along with his former company Amplify Snack Brands' sale to The Hershey Company for $1.6B in 2017.

Jeff Arnold, former COO alongside Mr. Shiver at Waterloo, now serves as the President and COO of LALO Tequila, a company founded by Eduardo "Lalo" Julio, grandson of Don Julio.

CEO Jeana Harrington joins the Board as its sixth member.

For more information about Mighty Swell, please visit mightyswell.com. Mighty Swell's TECHNIFLAVOR™ can be viewed on techniflavor.com this Thanksgiving.

Career Certified Acquires Amber Book, an Innovator in ARE® 5.0 Multi-Exam Course Prep, the Essential Exam for Licensure in Architecture 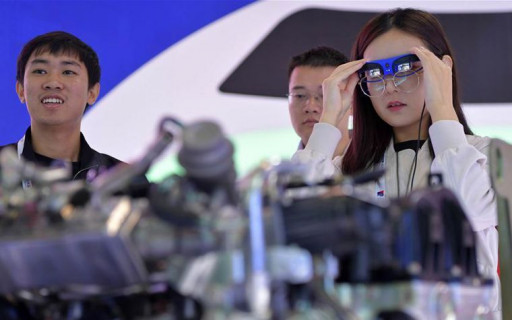 Young People experience VR
The 2022 World Conference on the Virtual Reality (VR) Industry is held from Nov. 12 to 13 in Nanchang

China's Ministry of Industry and Information Technology announced Monday that it approved the establishment of three new national manufacturing innovation centers, one of which is backed by research or tech firms in Jiangxi with VR as its focus.

More favorable policies will be implemented as the 20th National Congress of the Communist Party of China closed last month, with a chartered road map for accelerating the digital economy and building an internationally competitive digital industry cluster.

An upcoming spotlight event is the 2022 World Conference on the Virtual Reality (VR) Industry, to be held from Nov. 12 to 13 in its provincial capital, Nanchang.

In addition, six innovative application scenarios will be put into place, including a metaverse venue, virtual host "Jiang Xiaowei", augmented-reality live navigation, an opening speech with special effects and VR live broadcast, for online and offline participants to explore an immersive experience.

Official figures showed that 18 of the country's top 50 VR firms have settled in Jiangxi. With many VR hardware manufacturers swarming in, a complete industrial chain has taken shape, making it much easier for upstream and downstream firms to seek synergy in business development and innovation.

Apart from the annual conference, institutional arrangements and policy support also serve as the big catalyst for the province's VR boom.

It is with great excitement that the Washington Speakers Bureau announces the addition of Bear Grylls - host of 'Man vs. Wild,' 'Running Wild with Bear Grylls,' and double Emmy Award-winning 'You vs. Wild,' Global Adventurer, bestselling Author, and Philanthropist - to their exclusive speaker roster.

"Adding Bear Grylls to our exclusive speaker roster is an honor," explained WSB President Ryan Heil. "His ability to connect with audiences, to share his sense of adventure and story of resilience, and to provide a source of inspiration is remarkable."

Grylls is arguably the most famous face of adventure on the planet. A former British Special Forces soldier, he went on to become one of the youngest-ever climbers of Mt. Everest despite having broken his back just 18 months earlier. Since conquering Everest, Grylls has hosted more extreme adventure TV shows globally than anyone else in history.

His notable TV shows include the legendary Discovery Channel hit 'Man vs. Wild' and 'Running Wild with Bear Grylls,' now in its eighth season on National Geographic Channel. His 'Running Wild' guests have included President Obama, Roger Federer, Julia Roberts, Prime Minister Modi of India, and many others. Grylls also hosts the double Emmy Award-winning interactive Netflix series 'You vs. Wild,' where viewers get to decide what adventure he tackles.

A bestselling author, Grylls has sold over 20 million books. Additionally, he is an Honorary Colonel to the elite Royal Marines Commandos, the youngest ever UK Chief Scout, and the first ever Chief Ambassador to the World Scout Organization, representing a global family of over 55 million young Scouts around the world.

For a life-changing motivational experience that will help you build resilience and overcome any obstacle, book Bear Grylls to speak at your next conference, meeting, or corporate engagement in the U.S. through WSB. To learn more, visit: https://www.wsb.com/speakers/bear-grylls

WSB is the world's largest talent agency focusing solely on the corporate speaking and lecture circuit. For more than 40 years, we have represented the very best keynote speakers from a variety of fields, from fortune 100 CEOs, to athletes, coaches, authors, presidents, prime ministers, and thought leaders. We remain the first choice of the world's pre-eminent speakers through our relentless focus on integrity, discretion, and care for our speakers and our customers. We have been fortunate to have had the pleasure to represent 3 former U.S. Presidents, 6 former British Prime Ministers, 5 former Secretaries of State, iconic authors, business leaders, and countless others of the most impactful voices of the last 40 years.

Finding Home ATX (https://findinghomeatx.org), a community-led initiative to end unsheltered homelessness, announced today that locals Charles Wagner and Michael Sabrin will run 100 or more miles on November 12 to raise a goal of $100,000 to support the initiative. The Town Lake Loop Challenge run will start at midnight on November 12 and the two runners plan to complete at least 10 loops of the 10-mile Ann and Roy Butler Hike and Bike Trail in 24 hours. Wagner and Sabrin plan to set a Fastest Known Time (https://fastestknowntime.com/route/town-lake-loop-challenge) record for the most loops ever run consecutively around Town Lake (Lady Bird Lake).

On any given night, Austin has over 3,000 unhoused men, women, and children. Finding Home ATX is a community-led, three-year, $515M initiative to end unsheltered homlessness in Austin. The initiative aims to house 3,000 unsheltered individuals, add 1,300 new units of affordable housing, and to build a more effective Homelessness Operating System. Major donors include the St. David's Foundation, Indeed, City of Austin, Travis County, and several other corporations, foundations, and individuals.

"All of our community wants to get those living on our streets out of their tents and into homes with services," said Austin Mayor Steve Adler. "Our community heroes are actually doing something to help get this done. The inspiring passion of Charles Wagner and Michael Sabrin, together with the generosity of their partners, is changing the lives of our unhoused neighbors — mile by mile. They are an example to us all."

Charles Wagner is a father of two, UT Austin alum and software engineering executive at Indeed. He has made Austin his home for 20 years and though he started running during the pandemic, he's now an avid runner. Michael Sabrin is also a father of two, a chef and product developer for Whole Foods Market. Michael attended the University of Georgia, where he was part of the UGA triathlon team. During their training runs logging thousands of miles on Austin's streets and trails, Charles and Michael witnessed the growing impact of homelessness, and are grateful to use running to raise money and be part of the solution.

$1,000/mile sponsorships are still available, and donations can be made at https://enca.st/TLC toward the $100,000 goal. During the run, our fundraising page will feature sponsor logos for the duration of miles supported, and we will feature sponsors on our social media pages during and leading up to the run.

Who  Charles Wagner (Indeed) and Michael Sabrin (Whole Foods)
What  Running 100+ miles around Town Lake in 1 day
Why  End homelessness in Austin; set an FKT
When  November 12, 2022
Where  Ann and Roy Butler Hike and Bike Trail

Get After Your Bucket List This Black Friday; EF Ultimate Break to Discount Trips Up to 35%

Starting Nov. 10, EF Ultimate Break will offer huge savings (up to $1,200 off) on amazing trips for travelers 18-35 to destinations worldwide Thail...
Business